YA new release: “Courtship and Curses”

Posted on August 8, 2012 by Maryanne (mfantaliswrites)

“Courtship and Curses” ARC – I got to read it hot off the press! And look, swag!

A historical novel with MAGIC!

“Courtship and Curses” is Marissa Doyle’s third book and I think it might be her best yet. “Bewitching Season” and “Betraying Season” were set in the Victorian era (actually, just before that era, as Victoria is still a princess in the first book) and focus on twin sisters who are equally as concerned with learning to control and use their inherited magic powers as they are with the fuss and fun of their first season “out” in London society.

“Courtship and Curses” takes us back a generation, into Regency times. Yes, Jane Austen with a dash of magic.  And the Duke of Wellington. 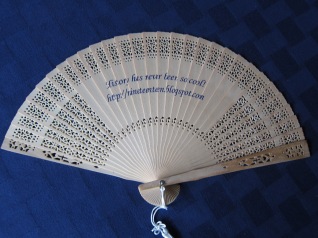 Hurry! In case of swooning, hasty application of a beautiful fan is recommended. (Thanks, Marissa!)

If you have read the first two books, you will instantly recognize some of the characters in their younger versions (I won’t tell who); if not, don’t worry.  This book stands easily on its own and is full of flesh-and-blood characters, true love, danger, and mystery.

One of my favorite things about this book is that the main character, a shy, serious girl named Sophie, has a disability. A real disability, not bad hair or a crooked nose. She has a shortened, twisted leg as a result of childhood polio (the author fills us in through an instructive “Note” at the end). Sophie can’t dance, a cornerstone of Regency courtship; people talk about her behind her back and think she must be “simple.”  Facing these short-comings is a huge struggle for her.  I loved that the author does not give Sophie an easy fix through her magic, letting her just float above the floor any time she wants. Sophie has to find a way through it on her own.

The mystery was really well done. I thought I knew who the culprit was… then I thought it was someone else… then someone else…  There were plenty of plausible possibilities and no cheap false leads.

“Courtship and Curses” hit bookstores on August 7.  You should rush out and buy this for yourself or your favorite teen, or ask your librarian to get a copy.

Do not disturb. Her Ladyship is engaged…